Some good news this week: three of my films have been accepted into the 2011 Dungog Film Festival: Entwined, Lillie and Ferdinand the Third! 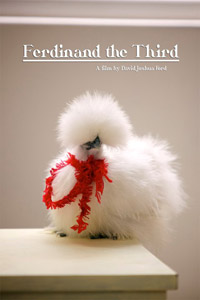 Ferdinand the Third (playing at Oovie Theatre, Sunday 11:45am): a Frenchman travels to Australia to declare his love for his his long-time friend… only to be lumped with her pet silky bantam instead (that ball of fluff in the poster). I workedon the black-comedy with Alexandra Edmondson, coincidentally a writer I met through friendships formed in Dungog last year!

I’m very proud of this film. It is a tight and entertaining 5 minutes. Our crew was a delight to work with, dedicated to pulling off a great look on a modest budget… in a grossly overcrowded apartment. We learnt how taxing action sequences with animals are… strangely not because the cat and chicken were difficult to control, but rather because they were languid! 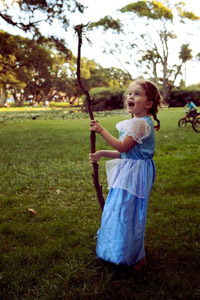 Rounding out a year of industry ‘don’ts’, Lillie (playing at the RSL Cinema 9:15am on Friday) follows the life of a four year old girl raised by her single mother and grandmother. She was such a delight to work with, and being documentary, the filming process didn’t have the same complexities as a drama would have.

Lillie has a natural openness with people that translates down the lens, the likes of which I typically see in children in countries like Mozambique or Brazil rather than Australia. I knew she’d be great on film and I wanted to explore the sense of wonder and intrigue that a four year old has for the world.

Her mother Pam and grandmother provide the backstory with amazing depth and honesty. I think the film’s strength is in contrasting Pam’s own traumatic experiences as a child alongside her daughter’s un-shattered world. It’s a family portrait of three of women, minus the men in their lives, and shows how difficulties that permeate down generations can be overcome by a supportive family member. 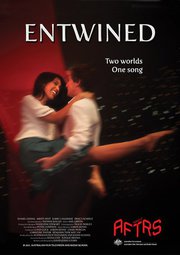 Entwined (playing RSL Cinema, Friday 4pm) is a musical drama about the romance between an Australian and an Indian. As my graduate project at AFTRS last year, we engaged five composers to write an original song and score. The music video screening at Dungog is a radio edit of the theme song from the film, combining pictures from the film together with some new scenes shot specifically for this shorter narrative.

Entwined is the most challenging film I have worked on to date, as reflected in the budget, number of people involved and the technical aspects of the concept – combining lyrics, music, dance & drama. The music video will be released on the net after its festival run, but I’m proud to have its premiere at Dungog!

Because Dungog is three hours north of Sydney, people have to get accommodation and commit to the weekend. It’s not like other festivals where you can dip in and out of sessions. As such, Dungog builds a fantastic community in a RELAXED atmosphere! Such a welcome break to Sydney. A holiday even.

There are many great Aussie films, guest speakers and workshops, but what I particularly love about Dungog are the social events: parades, gala dinners and parties. There is more than you can possibly do in three days, and eventually the cafes and pubs take over! I made a whole new set of friendships last year – people with whom I went on to make films with and even formed a sporting team with.

This festival is definitely a highlight of my year, and having some films in it is an added bonus! Cute township, interesting people, great films. And the odd cow, crisp air and space… 26-29 May… hope to see you there!!

The annual festival will run from Thursday to Sunday (26-29th May, 2011), with more than 160 Australian films including World Premieres, being shown, Master Classes, Gala Events, Parties and the fabulous local Main Street Parade.

Screening times for David’s films are:

You can find more information about David’s three films online at: