An interview with the director of Lillie 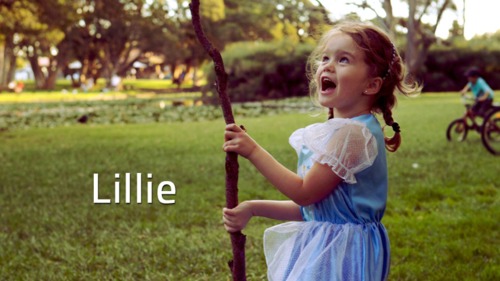 Interview with the director of Lillie, David Joshua Ford
An unpublished interview with a local magazine about my documentary Lillie (now published!)  Watch | Facebook

Q. Can you tell me a little bit about your short documentary Lillie? What is it about and what inspired you to follow the life of this family?

Lillie was the flower-girl at a wedding I photographed last year. She has a natural openness with people that translates down the lens, the likes of which I typically see in children in countries like Mozambique or Brazil rather than Australia. I knew she’d be great on film and I wanted to explore the sense of wonder and intrigue that a four year old has for the world.

Lillie’s mother Pam and grandmother provide the backstory with amazing depth and honesty. I think the film’s strength is in contrasting Pam’s own traumatic experiences as a child alongside her daughter’s un-shattered world. It’s a family portrait of three of women, minus the men in their lives, and shows how difficulties that permeate down generations can be overcome by a supportive family member. I really love this little film and Lillie herself is just fantastic!

Q. What hardships or creative struggles do you face as a filmmaker, when you choose to tell a story via a documentary as opposed to say, a more fictional narrative device?

Generally I think documentary is easier than fiction! Certainly so on a production level, because we accept the naturalism of the documentary style and this becomes a strength in areas like budget and production design.

The hardest aspect I find is the censure I place on myself as filmmaker. People assign great trust to me in the intimacy of the closed interview and I want to know the assembled film respects that. We’re dealing with representations of actual life, not an actor’s portrayal. It’s what makes documentary-making so wonderful – that there is inherently truth in the ordinary. It’s a bit like a parent sending their kid off to school for the first time though – I want people to know how amazing my subjects are but I also want to protect their life stories.

In that sense, fictional film is liberating because it allows your mind to wander and create scenarios (like I did for another of my recent films – a Bollywood musical). But it’s just a matter of finding the right tool for the job, and it gets interesting when the two forms start to blend.

Q. As a filmmaker, how do you deal with the time constraints placed upon you in the short film category? Do you find short films inspire more creativity and encourage filmmakers to find innovative ways to tell a story?

You have to be very concise in determining what the core of your story is in short form. As the creator, I learn more about the story than what ends up on screen. It’s challenging to try to approach the story with fresh eyes (like the audience does) and ask ‘is this segment essential to understanding the story and characters or can it be cut because it’s self explanatory?’.

It can be hard too when you have to cut some gems from the film because they are superfluous. For instance, we have one scene where Lillie quite spontaneously eats some flowers, calling them “flavour nice”. “Flavour Nice” became an expression amongst our crew to describe everything from our lunch to our stationary, but the sound bite didn’t make the final cut because there was other material that supported the story better.

Q. You’ve had so much success and experience as a filmmaker/producer/presenter. For you, what’s unique about the Bondi Short Film Festival (BSFF) that sets it apart from others?

Well personally I appreciated walking to the Festival because I’m a local! Bondi is an amazing area to live in and the beach venue was a great backdrop for a film festival.

I also like Francis Coady’s (the festival director’s) initiative to keep all content Australian. It must be very tempting to include buzz films from places like Europe, but there’s a consistency of voice when you gather story-listeners to story-tellers of the same nation. It felt homely.

Q. Film festivals have become so central to the cinema scene here in Australia with events like Tropfest putting filmmakers on the map. How important have you found these festivals to be in helping up and coming or even seasoned filmmakers find an audience, or even perhaps, create a unique space where independence and creativity is encouraged?

There’s something special about film festivals. In one sense their audience base is tiny compared to broadcast mediums, and yet their significance as an art form seems heightened by the act of gathering together for the event. It’s like the effect of hanging a picture on a white wall in a gallery – it focuses a group of people and starts a discussion.

Festivals are more for kudos than a money spinner. You enter them because you have an idea you want an audience for, or to meet other industry people or just because you’re passionate about making great films and want creative expression.

Q. Your thoughts on the winner of the BSFF?

Happenstance was a great film. It’s main strength was that the script was tight. I liked the casting choices, there were some wonderful subtitles in timing. It’s a very “Tropfest” film (off-beat humour with a twist and an end punch), so it was good to see it get some acclaim at Bondi Short Film Festival.

Q. Do you have any links to the local Bondi area that I could use to help localise our focus on you as a filmmaker?

I just finished Directing at AFTRS. I made an Indian-Australian musical using a house location at Dover Heights on the cliffs overlooking the ocean. I’m currently living in Bronte and have been in Bondi for the three years prior. I used to present a music show on Channel 31 which was produced out of Vaucluse. Centennial Park is the only place I feel “at home” in Sydney (I was born in Canberra). If you want to know more feel free to give me a call.

Q. Anything else to add?