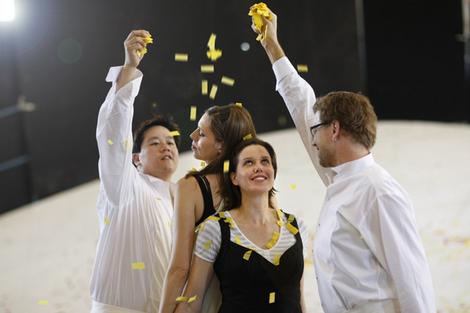 Cosi fan tutte conceived in a burst of confetti

JIM SHARMAN jumps to his feet and scuttles up a steeply-raked floor that skateboarders would covet. The slope stands in the centre of Marrickville Town Hall’s grand assembly chamber where the showman’s modern take on Mozart’s Cosi fan tutte is taking shape.

Born into the world of travelling sideshows, the theatre and opera director who captivated audiences with Hair, Jesus Christ Superstar and The Rocky Horror Picture Show is attempting to unearth the contradictory emotions and uneasy truths at the core of the opera buffa’s seductive score. “It has been conceived in a burst of confetti,” says Sharman of his starkly expressive staging for Opera Australia. “I want to communicate both the surface and substance of the piece. Usually you get one or the other. There is a brash theatrical side and a poetic side which can prove elusive. It shifts from the cartoonish to a work of great emotional depth and a revelation about love and desire not being mutually exclusive.”

Sharman has spent many months investigating the life and times of Mozart and his librettist Lorenzo Da Ponte with whom he also wrote The Marriage of Figaro and Don Giovanni. “Their work revealed the yearning, humanity and wisdom beneath the lightness and artifice.”

Early in its history, however, Cosi fan tutte was admonished for its morals and misogyny, notably by one Berlin critic who described it as “the silliest rubbish in the world; it only gets an audience because of the splendid music”. Sharman says it’s a popular misconception to dismiss the opera as easy listening. He argues the opposite. “It’s a serious comedy driven by betrayal, not just the young women but the men as well. It’s confronting and, I think, emotionally subversive.”

During rehearsal the director sticks to his long-held maxim: to stage the classics as though they’ve just arrived in the post and to treat new operas and plays like classics. The production will be sung in English in a translation by Jeremy Sams.

First performed in Vienna in 1790, Cosi comes from the age of reason to speak to an age of uncertainty, says Sharman, who proves to be as methodical as he is spontaneous. “It fell out of favour for a long period before recapturing the public imagination after World War I. The terrorist attacks of September 11 made it popular again. It’s now one of the most performed operas in the world.”

Mozart wrote Cosi in his mid-30s and the director has gathered a troupe of similar-aged creators and performers to re-energise the work at a time when Opera Australia itself has faced great uncertainty and is undergoing change. “After a choppy period, Cosi and Peter Grimes [opening in October] offer a sense of renewal [at OA] and a sign that the ground is beginning to shift in its culture,” Sharman says.

Subtitled The School for Lovers, the opera begins with the officers Ferrando and Guglielmo claiming that their two lovers, Dorabella and Fiordiligi, will be eternally faithful. Their confidant Don Alfonso lays a wager to test their allegiance. What begins as a sparkling romp with ample throws of confetti darkens into a morally ambiguous rite of passage.

Sharman, who directed the operas Voss and Death in Venice, is very much the tribal elder on the set of Cosi. More a paternalistic cajoler than autocrat, he likes nothing better than young artists venturing ideas and taking risks, much as he did in his liberating theatrical adventures in the ’70s.

Opening at the Opera House this week, the production was to have been his second collaboration with the OA’s music director Richard Hickox, until his death last November amid a controversial debate about musical standards and the alleged neglect of mature female singers. Hickox had planned to join forces with Sharman after the success of their revival of Benjamin Britten’s Death in Venice in 2006. They felt that the time was ripe for a popular and sophisticated interpretation of Cosi fan tutte. (The OA last staged the opera in a revival of a Goran Jarvefelt production in 2005.)

Sharman began to recruit talented, open-minded practitioners and performers. His hand-picked creative team includes Ralph Myers (set), Gabriela Tylesova (costumes), Damien Cooper (lighting) and Joshua Consandine (choreographer). They have conspired to conjure a fluid, minimalist, playful void – Myers likens his set to a loudhailer – to showcase a new generation of Mozart singers who, in Sharman’s view, promise to be the company’s great future singers. They are Sian Pendry, Rachelle Durkin and Tiffany Speight, all of whom star in Benedict Andrew’s version of The Marriage of Figaro for OA next year, and Henry Choo and Shane Lowrencev.

A vital element, however, was missing. Who would fill the not inconsiderable breach left by Hickox? Sharman began his most pressing search. He needed a maestro who trusted his vision, if only to avoid the clash of egos for which the opera world, rightly or wrongly, is renowned.

The director heard about Simon Hewett, a young Brisbane-born conductor who had been an assistant to Simone Young at Hamburg Staatsoper and who is firmly establishing a name for himself in Europe as a conductor based in Berlin. Sharman made tracks to France, where Hewett was conducting Mahler’s 3rd Symphony with the notoriously demanding Paris Opera Orchestra. They spent hours discussing Cosi and sharing ideas. The conductor watched a DVD of Sharman’s Voss and was won over by its realistic gestures and dreamscape aesthetic.

“I have been very fortunate in opera to get to work with fine artists and, as it’s turned out, Simon has become the key collaborator on this [production]. If the thinking between a director and conductor is simpatico then the results can be thrilling . . . The most fulfilling relationship for me was working on Voss with [the late conductor] Stuart Challender. I enjoyed his Australian-ness. Watching Simon in rehearsal reminds me of Stuart’s instinctive approach and unwavering control.

“There is a lineage there. Simone Young was an assistant to Stuart Challender and Simon worked as Simone’s assistant . . . He is eloquent and as passionate about making Cosi relevant to a new generation as I am. Mozart is a great seducer and the opera translates well to modernity . . . It is propelled by betrayal and [it] is closely related to Shakespeare’s A Midsummer Night’s Dream.”

As the tribe of singers, designers, musicians, production assistants and sundry OA personnel stream into the town hall, there is an air of anticipation at the final raw run of the opera before rehearsals move to the Opera House stage. The production has been dubbed “Aussie Cosi” by actor/video cameraman David Ford on YouTube. The show’s pulse and flavour is distinctly Australian, yet there are passing nods to 18th century conventions to avoid anything too kitsch. Early on there was vague mention of a barbecue complete with sausages in the Japanese wedding and party scene that happens upstage during the performance. The ceremony, inspired by a video wedding in the Botanic Gardens, remains but the barbecue idea was jettisoned.

A stage manager loudly declares that time is of the essence. “Today we want to do the whole opera without stopping if we can.” OA chief executive Adrian Collette murmurs, “Let’s rock ‘n’ roll,” as he settles in to watch the three-hour run, as does the company’s assistant music director Tony Legge. The much-admired baritone Jose Carbo plays the world-weary manipulator Don Alfonso, who sets the masquerades in motion. He is relaxed and eager to make a start. “I see the character as more avuncular than arch and the way Jim is approaching the piece feels natural and organic . . . He [Sharman] is trusting and affords all the singers the freedom and scope to develop [a character].”

Dressed in black, the director is almost childlike in his enthusiasm for his players. Hewett sits conducting alongside, his incisive and intuitive engagement with the singers ensuring a lively pace and sharp focus. “I was sceptical about doing it in English but I have come around to the immediacy of the approach and how Jim’s reading stays true and honest to the piece,” says Hewett. “It’s not a journey from innocence to corruption but looks to where the point of betrayal is. It’s an ashen-grey area . . . Mozart conjures sensuality and intensity through dramatic economy.

“Jim’s production offers a sense of realism yet also a suggestion of the theatrical curtain being parted to take the audience into an emotional dreamscape. Hopefully audiences will hear Cosi fan tutte differently in light of this production.”

Cosi fan tutte opens at the Opera House on Thursday.