Joyous wizardry of music and theatre 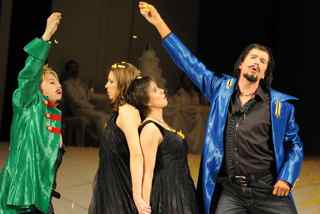 JIM SHARMAN is a name that immediately causes a frisson of interest and excitement when announced in tandem with the words “new production”. And especially when it’s a new production of a favourite warhorse such as Mozart’s Cosi fan tutte.

Sharman the showman – or shaman, take your pick – is a cerebral yet joyously visual wizard of theatre. He is still best known for groundbreaking musicals Hair, Jesus Christ Superstar and, most significantly, The Rocky Horror Show (then the movie adaptation, The Rocky Horror Picture Show, but also in his portmanteau of credits are such productions as Voss and Death in Veniceplus the most telling of the Patrick White theatrical canon. Glimpses of all are to be found inBlood and Tinsel his memoir, published by Melbourne University Press and highly recommended.

So, that’s what underpins the creative thinking behind this new production of , an opera first staged in 1790, a year before Mozart’s premature death.

And Cosi needs some underpinning in the 21st century because it’s what could be termed aproblematic piece. In essence, a couple of young men, Ferrando (Henry Choo) and Guglielmo (Shane Lowrencev) are goaded by an older, more cynical man, suave operator Don Alfonso (Jose Carbo) into trying to prove to themselves and each other that their true loves will be faithless hussies the minute their backs are turned.

Given that Cosi is subtitled “The School for Lovers”, it’s debatable what the quartet is supposed to – and does – learn. Ferrando and Guglielmo are officers, about to strap on swords and go off to war. Their tearful girlfriends, Dorabella (Sian Pendry) and Fiordiligi (Rachelle Durkin) swear eternal love and constancy and are offended by the suggestion that either might waver. Don Alfonso, aided and abetted by the pragmatic Despina (Tiffany Speight) knows better and bets to win on their weakness.

Boys being boys – and, let’s face it – boys knowing all too well how they would behave in similar circumstances, take the bet, then assume disguises and set out to do the dirty on each other and their girls. So, when the girls eventually succumb to temptation and Despina’s sageadvice that, as blokes have known for millennia, love and sex are not the same thing, the lads have their prejudices confirmed and – one could argue – learn nothing.

For their part, Dorabella and Fiordiligi learn that in keeping with the patriarchal constructs of all the best opera, the status quo will prevail: bad girls or lower class girls will pay the price and society’s norms will be upheld. (Think La Boheme, Madama Butterfly, La Traviata etc.) The best they can hope for, therefore, is to be truly sorry for behaving like young blades and, if they’re lucky, their young blades will deign to forgive them and True Love will be theirs once more.

Sharman’s cast is beautifully balanced in this dubious endeavour: Lowrencev is tall and gangly – and, when in disguise with lank dark locks, uncannily resembles art and philanthropy maven Brian Sherman, (who was in the opening night audience). Yet Lowrencev is a fine vocal and visual foil for Choo: a spunky chunk whose tenor voice would make an angel swoon. Similarly, Pendry and Durkin are thoroughly modern young opera singers: they are plausible as the local hot chicks, and they act well; their voices intertwining in moments of harmonic loveliness. While as the saucy sceptic Despina, Tiffany Speight is a deservedly confident scene-stealer and the comedic heart of the piece.

Ironically, if there is a weak link in the line-up it’s Jose Carbo. He’s simply too attractive, visually and vocally, to totally convince as the world-weary bastard Don Alfonso ought to be. If anything, it’s hard to suppress the thought that the women would be way better off making a play for him rather than sticking with their coltish boyfriends.

For modern audiences, well some of us anyway, there are a few problems with the idea of Cosias a mere romp and whimsical depiction of the battle of the sexes. There is a core of misogyny and misanthropy beneath the frothy surface that can and should be addressed. Sharman throws up some interesting diversionary tactics through the design and costumes concept. Gone is any hint of the Enlightenment elegance and deception of the old Oberle/Jarfeldt production. Instead there are layer upon layer of observers – of The Gaze. (Pause here to check out your visual and feminist theory text books.)

The audience gazes at the action on stage, a roving video camera (actor/video cameraman David Ford) enables a directorial gaze at specific aspects of the action; a tiny icing sugar couple on a traditional multi-tiered wedding cake gaze at the antics of the wedding party and are mirrored in a Japanese tourist wedding couple whose fate it is to gaze (and learn?) while simultaneously being the object of the audience gaze. For most of Cosi the chorus is also in the position of observer – at a tenuously staged wedding celebration, upstage, as the lovers and their teasers go about the business of fickleness downstage. And so it goes. It’s a disconcerting, unsettling series of usually unconsidered human traits which suddenly become disconcerting and unsettling when the objectivity of The Gaze is turned on them.

In this way substance is suggested and toyed with in a mainly pleasingly distracting fashion, but that’s as far as it goes. In a recent interview with Bryce Hallett (SMH) Sharman said, “It’s a serious comedy driven by betrayal, not just the young women but the men as well. It’s confronting and, I think, emotionally subversive.” Yes, but a funny thing happened on the way to realising that thought and it somehow disappeared in a finale of social power restored. (Commentator and Stagenoise contributor Caroline Baum has noted that in Jonathan Miller’s recent London production of Cosi the closing moments see the lovers acknowledge reality and depart in four separate directions.) Now that’s subversion.

Absence of profound subversion and thoughts aside, Sharman’s creative team has conjured a determinedly fresh interpretation of the opera, which was long overdue and welcome. It is sung in English in a quirky, irreverent translation of da Ponte’s original by Jeremy Sams that well suits the overall intent. The orchestra, under Simon Hewett (out of Simone Young by Stuart Challender) is sprightly and responsive to the demands of Mozart and the singers. Costume designer Gabriela Tylesova has gone to town on a succession of extravagant and witty feasts for the eye. She has heeded Sharman’s call for colour and movement and the contrast with Ralph Myers simple, steeply raked, white abstract set is arresting.

Ultimately, however, the production belongs to the singers and in this instance the six principals, Tiffany Speight, Jose Carbo, Henry Choo, Sian Pendry, Rachelle Durkin and Shane Lowrencev, can and do pick up and and carry the weight with ease and sure delight. It’s a pleasure to spend three hours in their company and the freshly minted spontaneity on stage is a tribute to them and Jim Sharman.