Dungog Film Festival has been something of a slow and quiet awakening for young film director David Joshua Ford.

Ford, 27, visited the area a few years ago, attended the film festival on the spur of the moment for the first time last year and, in a major coup, had three of his films shown at the festival in 2011.

“I have such positive associations with this place,” the Sydney-based director said of Dungog.

“It’s a beautiful location and there’s just something about this festival. 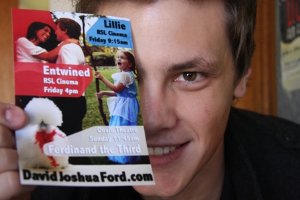 “There’s a community spirit and I’m so glad I made the decision to come here and be part of it.”

Ford’s showings were the documentary Lillie, music video Entwined and the quirky comedy Ferdinand the Third which starred a silky bantam.

“Directing is what I’ve always wanted to do,” he said. “But I think it’s a long and windy road.”

He said Dungog Film Festival was amazing for aspiring directors because it allowed them to show their talents but, more importantly, learn by watching the work of some of Australia’s best directors and producers.

But it wasn’t just about the films; it was also about being given the opportunity to mix it with a network of the best people Australian film has to offer.

“It’s the ‘in-between times’ that get people talking,” Ford said.

Ford believes the next 12 months will be integral to his career development and he hopes to be back in Dungog next year with some new films ready for the big screen.